About ACIM Teacher David Hoffmeister
Profound Clarity—Simple and Available to All! ACIM teacher David Hoffmeister is loving comfort for the heart and crisp, uncompromising truth for the mind that’s finished with confusion, illusion, and roles! Sweet nurturing and encouragement for the soul ready to take a step and let go of its grip on the familiar.

David Hoffmeister is a modern-day mystic and advanced ACIM teacher. He travels all over the world sharing his message, touching many, many lives with his consistent joy, peace of mind, and dedication to truth. He has been invited to teach in 49 states and over 30 countries.

David Hoffmeister found A Course in Miracles shortly after beginning his spiritual journey. Realizing it was the tool he needed for a complete and total shift to knowing the Awakened Mind, he threw himself into the book and its Workbook lessons.

Studying for eight hours a day is how David Hoffmeister spent his first two years with the Course. During the early years of David’s ministry, he was delighted to find support and encouragement from the voice of Jesus coming through its pages. David Hoffmeister was known by those who knew him well for questioning conventional wisdom, and he now had access to a spiritual path which instructed him to question every idea, belief, concept, and assumption in his mind. For a former scholar, this was very practical!

After the initial two years of study, he began to attend ACIM study groups, often going to five sessions per week. It was during this time that people began to refer their questions to him as great clarity and certainty began to flow through his words.

David handed everything over to Jesus: his daily affairs, relationships, and money. By letting go of the ego and worldly attachments, he soon realized that with the support of his inner Guide, there was nothing to be concerned about. David’s life became like a sweet walk on a summer’s day and his path was made straight. 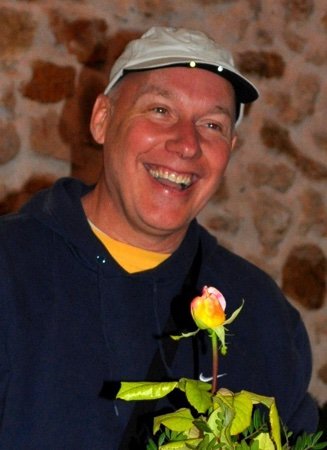 After five years of working with A Course in Miracles, David felt the prompt to travel, which was a huge leap into the unknown for him and the beginning of David’s traveling ministry. He started visiting many ACIM study groups around the United States. People at these groups started directing their questions to David, and he heard the Voice of the Holy Spirit coming through him to answer them.

David heard very clearly to become as a little child, to become completely Spirit dependent. He trusted that if it was Spirit’s prompt, he would be provided with all he needed: money, transportation, shelter, and food. He also knew he would be told where to go, what to say, and to whom.

During this time of attending A Course in Miracles groups, holding gatherings, visiting churches, and simply being invited to sit as a guest at the dinner table, David found the greatest trust and strength by allowing Spirit to speak through him.

The result was an experience of much joy. David also witnessed others lighting up, as they recognized what they themselves were seeking. Spirit was very convincing in doing His job, and David learned that what was beneficial for him was beneficial for the everyone.  All these years later, David is still in service to the whole and travels extensively.

Over many years, David was also guided into hermitage experiences. From these experiences, along with his deep devotion to A Course in Miracles, he finally quieted his mind from ego chatter and entered into a deep silence.

David’s gentle manner and clear delivery never fail to touch the heart. His non-compromising approach, along with his passion for living the Course in a very practical way, helps to light the path of any A Course in Miracles student. He is a beacon of an ACIM teacher for all those who wonder if enlightenment in this lifetime is possible. From 1996, David was guided to provide places for those desiring to step back from the world and go within. His first step in community living was to open a small house in Cincinnati which came to be known as the Peace House. Since that time, communities have grown in Utah, Spain, Australia, and Mexico. In these communities, mighty companions come together to realize the teachings of A Course in Miracles in their lived experience.

With their help, David’s teaching of the message of deep forgiveness as taught in A Course in Miracles is organized and extended to the world: gatherings and retreats, books, audio-visual media, music, movies for Awakening, live-streamed online events, as well as a massive internet ministry.

David shares his heart so freely, and there are so many avenues through which his teaching material goes out, that there is the opportunity for anyone with a deep and genuine calling to immerse themselves in this material wherever they find themselves.

The Foundation for the Awakening Mind has emerged from the guidance of Spirit on the path to Awakening. This foundation is dedicated to enlightenment and the awakening mind with many resources that are happily shared in support of Awakening to the truth of Who we are.

David and his devoted friends currently reside mainly in Kamas at the Living Miracles Metaphysical Center, as well as in Chapala, Mexico at La Casa de Milagros.

For more deep teachings go to:

“Awakening from the Dream” Online Retreats